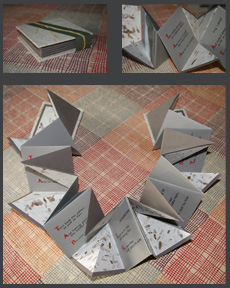 The Road Not Taken

First published in The Atlantic Monthly (August 1915), Robert Frost's "The Road Not Taken" entered the conscience of Americana.

On one early morning walk down a country road, I realized that I was standing on that road and it inspired the creation of this hand-crafted book, which includes calligraphy.

Would you like a one-of-a-kind book with your favorite song or poem written in calligraphy?