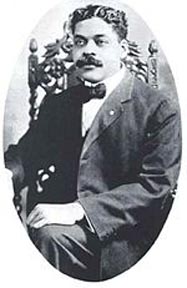 At the end of November 1986, I received an order for a copy of my book, Collected Poetry of Thomas A. Ekkens—Early Works, from the New York Public Library, specifically for the Schomburg Collection of Negro History and Literature. I once worked at this unique reference library as the Assistant Archivist. In fact, some of the poems in my book were written during that period.

This well-known library of black history and culture was collected and curated by Arthur A. Schomburg (1874-1938) (see photo above). His historically unique collection was gathered over the years through his keen detective and highly protective love for his race. It is a personal treasure for me to have been a part of Arthur Schomburg's legacy.

Before shipping my poetry book to them, I thought it appropriate to enclose a brief writing for their copy. It is forever glued to the inside front cover (written on Dec. 14, 1986):

An order was received from the Schomburg Collection for this book, and I wondered why? A white boy from the west? But maybe the answer is in history, which we are always making.

Martin Luther King Jr. was murdered in a faraway city but, when morning broke, Harlem was burning. I came out of the subway at 125th and Lenox to a smoldering morning, police packed together for safety, for safety keeping peace. Storefronts burning, people pillaging, cops with arms crossed.

They asked me, "Where are you going? Why are you here?"

I said, "I work here, at the Schomburg!"

"What's a white guy doing in Harlem after King is killed?"

But I worked in Harlem, roamed the streets in naive enchantment, walked with casual abandon into local establishments, looking for meaning. I had no white guilt and had no plan. I was really just there.

Before a black brother was a "Brother," there was Ernest Kaiser, the cornerstone of the Schomburg Collection. He didn't really like white people, but he seemed to accept me, begrudgingly. Still, in my mind, there's Arthur Schomburg who saved black history from oblivion and Mr. Kaiser who meticulously carried it forward. I will never forget the help he gave me.

Jean Blackwell Hutson was the curator then, back in the Sixties, and a woman whom only rumors knew. I would have liked knowing more of her as her career developed.

Stan Biddle was one of the librarians then, a young black man from Rochester with a new image of "right on" black. Together we established the archives of the Schomburg Collection, making available the papers of the National Negro Congress, Paul Robeson, Richard Wright, and others.

I know that I added a small measure to the history of the Schomburg Collection, which I will always love, but I would like to mention that the collection and the people added much to the depth of a young white man's life in the hub of Harlem.

I wrote a poem about this event called "White Boy in Harlem."